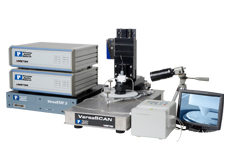 Scanning Droplet System (SDC) uses a compact peristaltic pump to force electrolyte through a small diameter tube and into a specifically designed head. This PTFE-based SDC head is machined to allow electrolyte to flow past an installed Reference Electrode and then to a port at the base of the head. When the head is positioned sufficiently close to the sample a droplet forms between the head and sample. Tubing is also connected to an output port of the PTFE head. A second channel of the same peristaltic pump is then used to draw electrolyte past an installed Counter Electrode and out of the system.  SDC experiments can be configured to either: Since electrochemistry occurs at an electrode/electrolyte interface, only the portion of the sample that is in contact with the droplet is being measured. This allows experiments to study a small area of a large sample, without cutting the sample and thus limiting edge effects. When running, the SDC pump creates a flowing droplet. SDC’s pump velocity can be tuned to study different effects of flow rate.